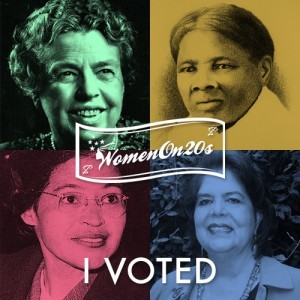 Women On 20s wants an esteemed woman on paper currency, starting with a newly-issued $20 bill. It ties into the anniversary of the 19th Amendment giving women the right to vote. While there are certain undeniable hiccups with the implementation and timeline of that legislation working for all women, it would be unwise to allow semantics to deter overall social progress. There is no utopia.

We believe this simple, symbolic and long-overdue change could be an important stepping stone for other initiatives promoting gender equality. Our money does say something about us, about what we value. So together let’s make our money egalitarian, inclusive and an affirmation of American values!

The final four candidates are as follows:

While all of the women being considered have made valuable contributions to society – some more widely known than others – Harriet Tubman would set a nice precedence in my opinion. So go vote!!! And the great thing is, any future changes to paper currency or even coins can continue. This campaign may have you fired up…..or leave you disinterested, but cultural shifts often start small and gain traction in other areas.

Apparently, The Root thinks this campaign is offensive enough to publish an article disowning it.

I’m troubled by the familiar “fight the white power” stance from The Root which is – and has always been wholly owned by white corporate media. Yes, this is the same black-oriented media that keep blacks misdirecting their focus and bashes black women as a matter of note (remember Jimmy Izrael?). Despite some recent hires that could potentially shift anti-black woman rhetoric, their history does not indicate much will change overall.

See my archive post, The Root = Essence = BET= Tyler Perry = Death To Black Women from 2011 where I discuss why

The BLACK PERSPECTIVE is POISON.

The BLACK PERSPECTIVE is fueled by blaming others and never takes any responsibility for its own diseased thinking.

The BLACK PERSPECTIVE has caused the DEATH of the black collective.

Now, The Root is actively discouraging any support of Rosa Parks and Harriet Tubman on the Women on 20s campaign. I won’t say the editor is intentionally trying to sabotage other black women, but I can’t say there is sound judgement that puts the interests of black women at the forefront either.  Removing Parks and Tubman defaults to one of the other two candidates that remain. You don’t see anyone else encouraging such bad strategy.

…And frankly, putting a white woman’s face on a bill would be akin to Hillary Clinton’s being the president of the United States; a woman’s face on the same old racist, patriarchal political system that continues in both insidious and blatant ways to disenfranchise women and people of color.

I don’t want Harriet Tubman’s face on a $20 bill; I want our people to be free from the chains of institutionalized racism and economic slavery. That’s how we honor her…..

Why are black women always in the middle of such foolishness? Between online banking and Bitcoin, fewer people handle paper money these days. How does denying an honorary position for Tubman or Parks benefit black women?

You know what will “free” blacks from racism? ECONOMIC CLOUT & ACCOUNTABILITY. Not these tired white hegemony debates that always ignore black on black racism and misogyny. Black women need to be reminded of their value, their contributions and that they’re handing over their power with every dollar they use to support other people’s causes, dreams and products with a penny on the dollar return – IF they even get that!

Don’t support killing an initiative that would honor the legacies of so many amazing women due to shortsightedness.

Copyright © 2023 Management Affair. All rights reserved. Reproduction in whole or in part without permission is prohibited.